skip to main | skip to sidebar

This is the worst book in the series so far, both in terms of story and the writing style.
The choppy writing style I noticed towards the later part of the previous book (not sure if it wasn't used earlier or I missed it), continues in this book from the beginning, and even more annoyingly, if that is possible. We have repetitions of the facts. Of the same thing. Again. And Again. And short sentences. Three words. Or two words. Or one.

A large part of the book consisted of everyone viewing Peter's paintings. This is described so many times, that it gets on one's nerves. The chase was okay by me (though not as interesting as a murder mystery), but the entire cause and means and result put together, it was a bit too far fetched. The climax was over-dramatized and yet, predictable.

I have enjoyed the series so far, but given the decline in last few ones, reaching a new low in this, I hope it picks up and I don't have to give up on it soon.

How the Light Gets In

How the Light Gets In

It is difficult to write a review of this book without giving away spoilers, but I will try to do so, though it may make the review a little vague and abrupt.

Once again, we have two parallel story lines - a murder mystery, and the escalating conflict between Gamache and Francoeur. The only common thread between the two is the murder victim's connection with The Three Pines village.

The murder mystery is not the focus in this book, and serves as a rather poor excuse for Gamache's visit and presence in the village. The murderer is rather obvious once we get the few facts that are eventually used by the inspector to reach the conclusion. The story itself is interesting though, from the cultural and psychological perspective.

The main focus is Gamache's investigation into what Francoeur is really planning for. This is more of a thriller than a mystery, and is quite a good one, but with an end that is a little to theatrical. I did not find the sinister plan completely unbelievable as several other readers, only the extent seemed rather extreme.

One major interest in this series is the development of the story arcs of the primary characters, which had been more or less believable so far. But the events in this book do not just stretch the belief, they reach up to a cinematic climax and a happy-ever-after ending. Gamache is increasingly becoming too-good-to-be-true; I really like him, but the other characters like Jean-Guy or Nichol or Clara, with their own flaws and constant character development, are much more interesting.

The writing style in this book was jittery. I felt there were several instances of repetitions of the same events or explanations. But what annoyed me most was a whole bunch of chopped sentences, two-three words, attempting to build up the tension during the climax. I am not sure if other books didn't have this or I did not observe it, but in this one I definitely noticed. I do hope we have a smoother story and style in following books, because I have really enjoyed this series.


Click on the letter to find authors starting with it

Alan Bradley
- The Dead in Their Vaulted Arches

Arthur Golden
- Memoirs of a Geisha

Asha Miro
- Daughter Of The Ganges

C:
Carlos Ruiz Zafon
- The Shadow of The Wind

Chetan Bhagat
- One Night At The Call Centre
- Revolution 2020

Chimamanda Ngozi Adichie
- We Should All Be Feminists

Clare Balding
- My Animals and Other Family

Elizabeth Peters
- Crocodile on the Sandbank

Eva Ibbotson
- A Countess Below Stairs

Frank B. Gilbreth Jr
- Cheaper By The Dozen

Frank McCourt
- Angela's Ashes: A Memoir of a Childhood

G:
Gabriel García Márquez
- Love in the Time of Cholera

I:
Indu Sunderasan
- The Twentieth Wife
- The Feast Of Roses
- The Mountain of Light
- In The Convent of Little Flowers

Ira Trivedi
- What Would You Do To Save The World

Jamie Ford
- Hotel on the Corner of Bitter and Sweet

Jeffery Archer
- A Quiver Full Of Arrows
- False Impressions
- Not A Penny More, Not A Penny Less
- As The Crow Flies
- And Thereby Hangs A Tale
- The Eleventh Commandment

Jenny Colgan
- The Little Shop of Happy Ever After

John Boyne
- The Boy in the Striped Pyjamas

K:
Kaavyaa Vishwanathan
- How Opal Mehta Got Kissed, Got Wild And Got A Life

Kiran Desai
- The Inheritance Of Loss

M:
Mark Haddon
- The Curious Incident Of The Dog In The Night

Miscellaneous
- A Study in Sherlock

Neil Gaiman
- Sleeper And The Spindle

Preeti Shenoy
- Tea For Two And a Piece of Cake

R:
R. K. Narayan
- Gods, Demons and Others
- The Painter of Signs

Raj Kamal Jha
- If You Are Afraid Of Heights

Rhys Bowen
-Above the Bay of Angels
-Her Royal Spyness

Rob Buyea
- Because of Mr. Terupt

S:
Salman Rushdie
- Haroun and The Sea Of Stories

Srinath Perur
- If It's Monday, It Must Be Madurai

Sudhir Venkatesh
- Gangleader For A Day

Tushar Raheja
- Anything For You Ma'am

V:
Victoria Holt
- Bride of Pendorric
- Seven For A Secret
- The Black Opal
- The Time of the Hunter's Moon 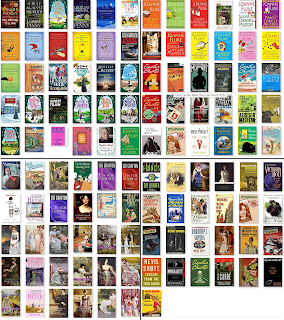 2020 has been a year of binge reading light books for me. I had set up a challenge to read 50 books this year, but ended up reading more than 115 (including few rereads), although the number represents more of quantity than quality. I read a number of cozy mystery series, and also finally read Georgette Heyer and Wodehouse. I would like to write my experience with the cozy mysteries I have explored, but for now, the highlights for the year ... 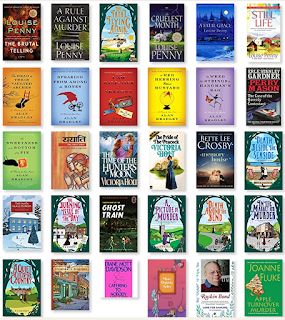 Among the standalone books, the ones I liked best are:

Lone Fox Dancing [Ruskin Bond] – What can I say about this that hasn’t already been said? He is such a natural storyteller, that despite being an autobiography, I read it a few sittings, and loved every word of it.

Dewey: The Small Town Library Cat [Vicki Myron] – This is a warm and moving story, and I loved it despite not being an animal lover. And what bibliophile can resist a library setting?!

Moriarty [Anthony Horowitz] – I have read quite a few Holmes pastiche works in last 2-3 years, and this is one of the best I have come across so far.

Yayati [V S Khandekar] – Though I had an issue with the plot and did not like it as much as I hoped, it was an engrossing read. What makes it noteworthy to me is that this was the only Hindi read of the year. 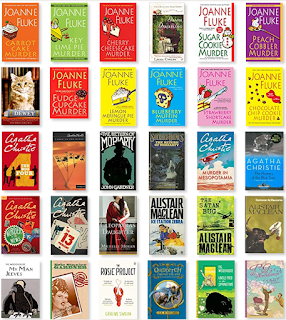 And a note on the authors whose works I binged on:

Georgette Heyer – finally got around to reading her novels (24 of them in succession!), and loved them – not for the romance, but for the witty banter, and the enchanting if hypocritical society of the regency England. Though some of the stories had too much of class or gender bias for my liking.

Hannah Swensen Series [Joanna Fluke] – enjoyed the first few books, but gradually the plots became thinner and leaner (pages were filled with recipes and tiresomely repetitive details of routine life), and gave up in frustration after 10 books.

Perry Mason Series [Erle Stanley Gardner] – read the remaining few books of the series I hadn’t read. I have enjoyed these since my teens, and still do, but now I can’t help feel that they are quite sexist.

Victoria Holt – I enjoyed her novels in teenage, though more for the mystery than for romance. I revisited her after a long time, in last couple of years, but now they were hit or miss. Mystery part is usually obvious to me now, and the sexist attitude got to me in about half of them.

Hercule Poirot [Agatha Christie] – I love HP stories, and have read them many times. There are several novels I hadn’t read, and began to read them. Sadly, most of them didn’t work for me – the plots are usually very convoluted, and in several of them Poirot does not make an appearance until half or more. 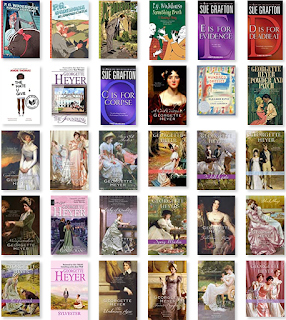 Lady Hardcastle Mystery series [T. E. Kinsey] – this was an interesting find (and is available on KU). The leading ladies are an unlikely pair – a titled English lady and her maid, who banter about as they solve murders in the early 20th century. Perhaps too much to read many of them at one go, but good fun at small intervals.

Blandings Castle, Jeeves [P.G.Wodehouse] – I must have read some of his books once upon a time, but hardly remember them. I started with Blandings Castle series, enjoyed a couple, but there’s only so much enjoyment I can find in nonsensical escapades. I quit this series after 6 books, and only one of Jeeves. I think it may be better to read them one at a time, between more serious books.

Flavia de Luce [Alan Bradley] – Another interesting find, with an unlikely heroine – an eleven-year-old chemistry enthusiast who is precocious yet naïve, full of grand schemes and a confidence(sometimes too high) in her intelligence. Enjoyed the first 6 books in the series, but felt that it was losing steam and quit before b ecoming too frustrated.

Chief Inspector Armand Gamache Series [Louise Penny] – read 5 of the series in 2020, and continuing at present. Set in a small Canadian village, it is a very welcome change from the usual murder mysteries set in UK or US, and a lead character who is kind, sociable and in a happy marriage 😊 It is as much about the characters as the mysteries, and I am quite invested in them. 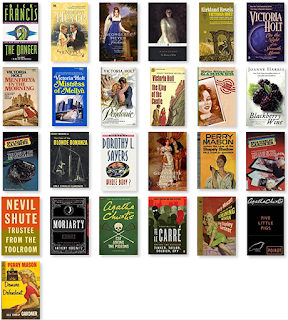 Email ThisBlogThis!Share to TwitterShare to FacebookShare to Pinterest
Labels: Reading

I loved the previous two books in the series, and thought that it was getting better and better. But this was a disappointment in some sense. I am not partial to the Three Pines setting, so a mystery set in another place is welcome too, as long as it is a good one. But this one was just too cluttered, as the author seemed to be experimenting with several formats all at once.

There are two parallel murder mysteries, one with Gamache in Quebec, and the other with Beauvoir in Three Pines. Both of them were interesting in themselves (though the one with Gamache was understandably more involved), but they had nothing to do with each other. Flashbacks from past interspersed with the current events is a fairly common device; however, here we have the memories of the same terrible event from the perspective of both Gamache and Beauvoir. It became altogether very confusing as the reader has to reconstruct the whole event from bits and pieces through the entire length of the book.

I found the story line with Gamache set in old Quebec City particularly interesting, for its historical context and the way he solves a 200 year old mystery. Beauvoir is finally able to connect to some extent with the people in the village, indicating a personal growth. The flashbacks describe well the trauma that our two leads underwent in the harrowing incident, and the post effects physically and mentally. I love the characters, and the way the author captures the changes in their lives, relationships and thought process over time.

I am not convinced about Beuavoir's solution of the murder of the hermit. It is almost like magic ... one moment you have multiple suspects with plausible explanations, the next moment the murderer is pulled out of the hat. Even less convincing is his inference that the hermit was Old's father, based on the usage of a common phrase "old son".

Featured on this blog ...

Down the Memory Lane